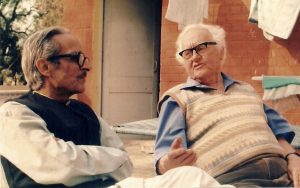 Ralph Russell (1918-2008)  was widely regarded as the leading western scholar and translator of Urdu literature. I was lucky to learn Urdu from him, and to work closely with him for the last 26 years of his life. He encouraged me in my writing, and it was my privilege to edit his. I am now his Literary Executor, and work with publishers to keep his legacy available.

For over 30 years Ralph led the teaching of Urdu at the School of Oriental & African Studies (SOAS), University of London.  He also set up courses in  Urdu language for adults in the wider community in the UK.  His earliest books, produced in collaboration with Khurshidul Islam, have remained classics: Three Mughal Poets: Mir, Sauda, Mir Hasan and Ghalib: Life and Letters. Both are available from Oxford University Press, India, and major booksellers.

He is best known for his work on the great 19th century poet, Ghalib, and much of his life was devoted to translating  Ghalib. The Oxford India Ghalib: Life, Letters & Ghazals is a compendium which he edited, and which also includes much of his own work on Ghalib.

Personally he was an exceptional man who made a vivid impression on all who came into contact with him — by his personal warmth, his obviously genuine interest in everyone he met, his absence of any sense of status, and his deeply-felt humanist values. When he died — on 14th September 2008 at the age of 90 — tributes were received from people across India, Pakistan, the UK and the US — from scholars, former students, and many others whose lives he affected in more diffuse ways. Francis Robinson, a professor of the history of Islam in South Asia, said, ‘Ralph was a remarkable scholar but an even more remarkable human being. His powerful sense of the brotherhood of humankind, and his service of humankind in his own life, is an example which has influenced my life as I am sure it has influenced those of many others.’

Spreading an interest in Urdu literature
Ralph’s enthusiasm for sharing his love of Urdu was proverbial. He was teaching and writing up to a few weeks before his death, and he wrote always in a way that he hoped would make Urdu literature accessible to as wide a range of people as possible.

I have edited two new editions of his work, designed for people who know no Urdu, but which have been equally appreciated by Urdu speakers :

A Thousand Yearnings: A Book of Urdu Poetry & Prose
This is Ralph’s personal, eclectic selection  from two centuries of Urdu literature  – stories, essays, anecdotes, poetry, and extracts from an early novel. There’s an introduction by me about his contribution to Urdu literature studies. More detail here:
https://www.speakingtigerbooks.com/books/a-thousand-yearnings/
And here’s a review by the historian Rana Safvi:
http://bit.ly/2YlqVe9

Auto/biography
Ralph felt strongly that people should write about their own lives, sharing honestly their responses to what they had experienced. He practised this himself throughout his life and encouraged many others to do the same, generously giving time to editing or translating what they had written, and finding ways to get it published. In the last decade of his life he gave priority to producing his own autobiography, with my editing help, drawing on reflections he had been writing throughout his adult life.

The 1st part, Findings Keepings was published in 2000, Part 2  Losses Gains was completed before he died, and appeared two years later, in 2010. Both are available from Three Essays Collective in India.

Ralph’s influence
Ralph was a regular contributor to the Annual of Urdu Studies, published by the University of Wisconsin. Volume 24 (2009, the year after his death) includes tributes by many who knew him. Here’s a selection:

Francis Robinson, What Ralph Russell meant & means to me,
https://minds.wisconsin.edu/handle/1793/38109

The Singapore-based journal Kitaab (which means ‘book’) interviewed me about our collaboration:  Working with Ralph Russell

Language teaching
Ralph’s personal influence extended far beyond  university teaching, through the Urdu language courses he ran for English-speaking adults in the UK. He started this work in the early 1970s, and took early retirement from SOAS to give more time to it. He taught (mostly without pay) in cities across the UK, wherever a group of interested people could be gathered together. Alison Shaw’s article tells the story:
Ralph Russell & Teaching Urdu to English-speaking adults in the community,
https://minds.wisconsin.edu/handle/1793/38113

He  also did a great deal to encourage teachers in linguistically diverse schools in the UK to value the the languages of their pupils, and worked with education authorities to persuade schools to teach these languages.

Resources
For anyone wishing to study his work, a full bibliography of his publications, prepared by me after his death, is available at https://minds.wisconsin.edu/handle/1793/38121. Shortly before his death Ralph set up a website giving details of his books – www.ralphrussell.co.uk . It has not been updated. His personal papers are in the archive of SOAS.