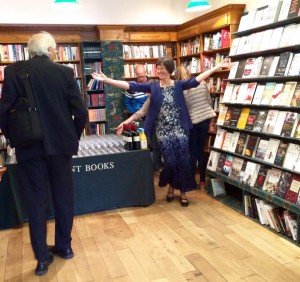 Daunt’s Bookshop, London –  the launch of my novel, Uncertain Light. A buzz of excitement as each friend arrives and finds others not seen for years. I’m flying on adrenalin, watching them discover each other, thinking – My book did this!

One journey has ended, another is beginning. I have no idea where it will take me, what experiences it will bring, but right now there are 120 people looking up at me as I stand on a chair, waiting for me to tell them what the book is about, and why I wrote it. 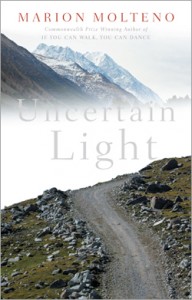 If you open Uncertain Light you’ll find yourself on a road that leads deep into the mountains of Central Asia. It’s winter, early morning. A civil war has been dragging on for four years, and you’re watching a convoy of UN vehicles trundle up the road to find armed men hidden up there, and make sure they know there is a cease fire. Someone you know – possibly someone you love – is in one of those vehicles. They disappear round a corner, into the uncertain mountain light.

A story may have many starting points. For thirteen years I worked for Save the Children, in countries across Asia and Africa – in the poorest parts, that tourists never see. I was in Mozambique in the aftermath of a flood, whole villages washed away. I was flown into Mogadishu in a plane carrying medical supplies. In Mongolia – a place of punishing winters – I was in a town where the entire heating system had failed – they had run out of coal. In Rajasthan I sat on the floor of a mud house with children who were learning to write by candle light – by day they were out in a semi-desert landscape, hours from home, responsible for the family’s buffaloes. I asked a little girl of eight, How do you control such a huge beast? You just twitch its tail, she said.

Everywhere, I learnt from children. I worked alongside people of that country, many of them inspiring. Others were ‘internationals’, moving from country to country – each with their own story of how they had got into that life, but all to some extent moulded by its huge possibilities, its frustrating limitations. Moving in and out of such environments challenges things we take for granted. When you’ve just spent two weeks surrounded by skinny children, you can’t bear to see how much food we throw away. A tap of running water comes to seems a magic thing; the clutter of possessions we all have, obscene. These were experiences I could find little way of sharing, and even for myself, they were difficult to digest. Somewhere in the recesses of my mind, the germ of a story began to form.

Another starting point … My work took me to Tajikistan, a country of awesome mountains, an ancient culture – now struggling to recover from the effects of war and the economic collapse after the end of the Soviet Union. The programme I worked with was staffed almost entirely by women who had lost husbands in the war – women from both sides of the conflict, now working together to prevent children becoming destitute. They were exceptional people – warm, compassionate, competent. They had been educated by the Soviet system, but they wore traditional highly coloured Tajik dress. And they loved poetry. The language is Persian, some of the greatest Persian poets came from here. Here were stories, asking to be told.  The ‘airy nothing’ of my earlier imaginings had found  ‘a local habitation, and a name.’

The next time I went to Central Asia I invited my daughter, Star, to come with me. She was at the time leading a travelling life – had just made a yurt – and here we were in the place where yurts were invented. Everywhere we saw signs of the transitions people were dealing with – whatever the faults of the old system, nothing they were used to could now be relied on. Layers of older ways were re-emerging, alongside new global pressures. We talked about the novel I had begun to write … How do you hold together so many disparate strands?

Years later, she asked me what had happened to it. ‘It never took off,’ I said. ‘Didn’t know where it was going.’ She got me to talk about it, and urged me to try again. Without that spur, I doubt it would have happened. But by then I was ten years, three births and one death further on, and it became a different story.

People who have read a pre-final version and put their reactions on the Advance Editions website have used many different words to say what – for them – it is about.  It is about love – but of many kinds; grief – and the need to get beyond it; courage, compassion; poetry – and the everyday-ness of life. I’m happy with any of those words. I’m particularly happy when people simply say that they settled in an armchair with it and hardly emerged all weekend.

For whether we write them or read them, stories connect with something deep in the human psyche. We need stories to make sense of our experience of life – to manage our fears, to nurture our hope, to share our delight. We need stories so we can read ourselves to sleep at night, signing off from things that bug us, that we can’t change – or be inspired to think we can. We need stories to transcend boundaries – to imagine ourselves into places we can never go, to become people we can never be; to discover our own thoughts and feelings lived out by someone else, in another time, another culture, and understand that we are all one. Writing Uncertain Light has been all those things for me. I hope it will be some of them for you.