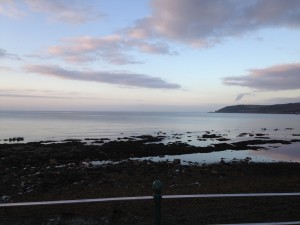 In Penzance to talk at the Literary Festival, I wake before dawn and walk along the sea-front. Last night a woman in the audience listened to me talk about the hostage-taking with which Uncertain Light begins, and then told us quietly that her son had been a UN peacekeeper and had been taken hostage. We were stilled by the weight of her memory, by her courage in sharing it. The fiction that is my book felt insignificant compared to the reality she had lived through, but it had created the space into which she spoke. The feeling in the room was palpable; we were strangers no longer.

I receive constant reminders that the reality reflected in the fiction is something I may have evoked but it reaches out beyond what I can imagine. People who know no one who has worked through a civil war tell me that the story speaks to them intimately, about their own dilemmas. There are readers who are dealing with grief, stuck in the dreariness that follows loss. In our contact since they read Uncertain Light we talk about their own lives. I feel humble every time this happens. 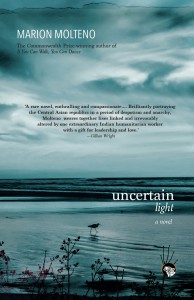 A South Asian edition of Uncertain Light is about to come out. I stare at the new cover –  I had thought nothing could be as evocative as the book’s first cover, but here is another image that captures not the treacherous mountain light, but a moment of inner reflection on an all-but deserted beach. It’s where I was this morning, alone on the sea-front. I am touched by the ability of the cover designer to project the inner eye.

I can also scarcely believe my luck. Why, with so much excellent English language fiction being written in India, did Speaking Tiger Books take on a novel by a non-Indian? When I asked Renuka Chatterjee, my editor, she said, ‘We took it on because we loved it. It’s not about being Indian or non-Indian – but just having a good story and being able to tell it well. And if anyone is still concerned about nationalities, the pivotal character, Rahul Khan, is Indian anyway.’

For me, its publication in Asia is hugely significant, bringing the story back to its source of inspiration.  Speaking Tiger Books is based in Delhi – where Rahul grew up. It will be read in many of the places his life took him. I think of Alastair Niven’s comment that it is ‘a moving and necessary book’. Necessary is an unusual word to use about a novel, but now I feel how appropriate it is, for Uncertain Light is being published at a time of increasing communal tensions throughout the region, tensions of the kind that formed Rahul – son of a Muslim father and a Hindu mother, who in his own person represents not just the possibility of creative co-existence, but its necessity.

Three weeks after the Penzance festival, Sara MacDonald, the woman whose son had been taken hostage, wrote in her own blog about that moment when her reality and my fiction came together. She calls the piece Serendipity. You can read it on her website at http://bit.ly/2bK6IE8