A chance encounter in a bookshop in Old Delhi … Books overflowing everywhere … Tessa, a young traveller with a backpack …That’s where the central story of Uncertain Light  began.

Preparing to go to India, I’m thinking back to my own first journey there – also solo with a backpack, but I wasn’t a nineteen-year old on a gap year, I was thirty-seven.  What took me? I had taken two months unpaid leave and left our two young children with my husband. He’s an excellent father, but still – ?

For four years I had been running English classes in London for women from India, Pakistan, Bangladesh. I got drawn into their lives, their issues. I studied Hindi. I listened to Indian music. I made myself look anew at things they found beautiful which at first I did not. I was reading about South Asia’s history, its cultures, politics, like it would provide answers to questions I could hardly frame. We ourselves were recent immigrants to the UK and I had adjustments of my own to handle – how did I find the head-space to explore another culture so persistently? I don’t know; only that somehow it became a leit-motif that accompanied my own inner journey.

Though a late-starter, I did what most backpackers do. I had bizarre encounters on trains, and incidents with locks in cheap hostels. I fended off the press of rickshaw drivers when I arrived at a station. I failed to respond to beggars and felt miserable about it. I discovered the delight of gane ka ras (sugarcane juice), watched the cane being crushed by a steel machine that must surely have been fifty years old. I ate delicious chaat (cooked snacks) from street stalls, and regretted it when diarrhoea took over. I stood awed before gigantic structures centuries old cut into rock or extraordinary carvings on the walls of temples. As an outsider I was exempt from many of the constraints of class, gender, caste, and could do things like persuade a cycle-rickshaw rider in Jaipur to let me have a go pedalling while he acted the passenger (I wanted to see how hard it was.) 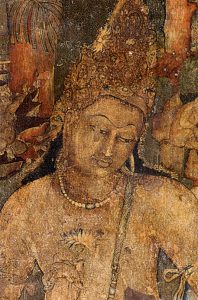 My fragile hold on Hindi created some absurd moments. Contemplating the cave paintings in Ajanta (Buddhist and millenia old), I told a young tourist guide that I had read a book about them. He looked deeply impressed – and too late I realised that instead of parhna (the verb ‘to read’) I’d used likhna (‘to write’). But the blunder got us laughing, and by the end of the day he had invited me home to meet his mother and sisters. They were fascinated by my glasses; they didn’t know anyone who wore them, and had assumed they were a fashion item.

But unlike most travellers, in two months in India I was only rarely in a hostel or hotel, for I plotted my journey to take in the families of friends back in London. Living for a few days in each household was an unrivalled way to experience India’s social diversity – of religions, life situations, attitudes. From a spacious flat in Bombay looking out over the sea I moved to a crumbling multiple-family house in Lucknow, where we drew water from a pump in the courtyard and slept on string beds. In the hills near Haridwar I stayed in an ashram with a friend whose grandfather had retired there to meditate. In Qadian in the Punjab I was absorbed into an Ahmadiya family (Muslims who are regarded as non-orthodox), and spent two days with women who never moved out of the house except in a burkha. In Gujarat I was the guest of an Arya Samaj family (a reform movement of Hinduism). I accompanied a head-teacher to her school to watch young girls learning complex bharata natyam dance sequences, and realised how little we in the west challenge children to use their extraordinary capacities of memory. Gender roles in homes where I was a guest were never fully predictable. In the household of a polo-playing army officer, stridently ‘western’ in his attitudes, the women had to engage in quiet subterfuge to do things he accepted in me but would not have countenanced in his own family. In another home I was taken off by the women to sit on the flat roof and learn to winnow the husks off sesame seeds, but it was the man of the house who checked before I retired to bed whether I was ‘addicted to bed-tea’ in the morning. (I am.) No preconceptions could survive this multiplicity.

Back in London I could enter into the lives of my Indian and Pakistan friends at a different level. I had a sense now of the journeys they had made, leaving all that behind.  I began writing short stories about some of those transitions – theirs and mine. In 1987 they were published – A Language in Common. Ahmed Rashid, in The Independent, called it ‘The most extraordinary book of short stories – one of the first attempts to straddle in fiction the social divide between white Britons and Asians.’

A window onto other lives

I’ve been back in India many times, mainly through my work with Save the Children, but it’s always a challenge. Now, nearly thirty years since that first journey, I’ve been going through the catalogue of Speaking Tiger, the Indian publisher of Uncertain Light, looking for books to help me understand the complexities I am going into. There are some impressive sounding writers: Harsh Mander – ‘works with survivors of mass violence, hunger, homeless persons and street children.’  Anubha Bhonsle – ‘reports from Jammu and Kashmir and the North East of India on the impact of long-standing conflict.’  Nandita Haksar  – ‘human rights lawyer, has been involved in the women’s movement from the 1970s.’

This is an extraordinary country. It has mega-scale poverty, discrimination, social problems, and also so many remarkable people trying to do something about them. I’ve been encountering them from the start of my connection with India.  Ela Bhatt, founder of the Self-Employed Women’s Association – I travelled to Ahmedabad to meet her and she invited me to join a team meeting. The women supported families with home-based piece work – rolling biri cigarettes – collecting recyclable waste. We sat cross-legged in a circle while they talked about their attempts to negotiate better terms from middle-men. 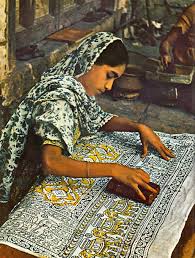 Afterwards a lively young woman who did block-printing on fabric took me home to demonstrate her craft. I don’t know which made the bigger impression – the skill and concentration it required – the repetition, bordering on drudgery – or her energy and confidence, now that she was taking collective action with other women. And in Delhi, Primila Lewis – as a social activist she had helped farm labourers to claim their rights under labour laws; for that she spent eighteen months in prison during Indira Gandhi’s Emergency, and wrote movingly about her experiences and the women she got to know in prison. 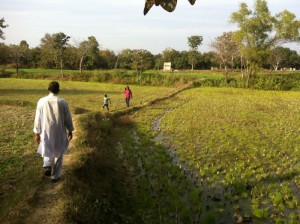 Another powerful memory that reimagined itself in Uncertain Light … An American friend had worked for a year on a Gandhian-inspired project in  rural Bihar, and he arranged for me to spend a few days there. It was on land  acquired in the Bhoodan movement, donated by landlords to the peasants who lived on it. A volunteer took me on a walk through neighbouring villages whose bare-survival conditions showed up how transformatory this project had been.

Later, in my time with Save the Children, I saw many similar transformations. A young colleague accompanied me on a journey of hundreds of miles to initiatives that  we were supporting … Night schools for children who herded animals by day … Mother-and-child health centres in a tribal area of Andhra Pradesh … In Orissa, on land where houses had been flattened by a cyclone, a community-run pre-school and vocational centre. In Delhi I met women who ran mobile creches for infants whose mothers carried bricks on building sites. Behind each of these and other initiatives were a complex set of histories. One organisation was caught up in internal disputes – the original charismatic leader had resisted letting others in on decision-making. In another, there were issues about funding not being properly accounted for. These are predictable human frailties, not unique to this field. None of it diminishes the remarkable phenomenon: each of these projects had been started by someone who stepped out from the privileged life they had been born into, to try to do something, however modest, for people burdened by extreme poverty; and to confront the socially constructed barriers that prevented them from getting beyond it.

The first flickering of Uncertain Light  goes back all that way. Fragmented, highly coloured moments lodged in my memory, to germinate decades later in fiction. Wherever the story would later travel, this is where it began.