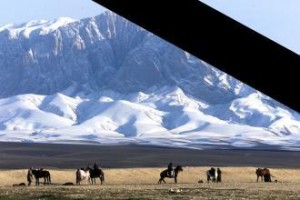 Yet again, more tragic deaths of aid workers. On the night of 2nd June, in Balkh province in northern Afghanistan, nine Afghans were attacked as they slept, and murdered by an unknown armed group. They were working for People in Need, which has been in the area for more than 10 years, delivering health, education and agriculture support in this starkly beautiful but implacably dry area.

In Afghanistan alone, 26 aid workers have been killed since January 2015, 40 more abducted. I feel humble thinking about the special kind of courage it takes to keep working in these situations, and what people close to those who have died must be experiencing. I’ve been there in my mind for all the years of writing my new novel, Uncertain Light, imagining myself into the minds and hearts of people in just that situation. It is particularly painful that just as the book goes out into the world this is still happening to so many.

Perhaps the first spark that led to me writing Uncertain Light was being brought face to face with my own lack of courage to do what such people do. I had just started as Save the Children’s Education Advisor and one of the first places I was asked to go to was Somaliland. This was 1994, the civil war in Somalia was in full, chaotic swing. In the north, Somaliland had declared itself a separate state and was said to be more ordered, but I found it hard not to be anxious about going there. I had friends among Somali asylum seekers in London, and as far as I could learn from them it was still a very insecure place. I was to be flown in from Nairobi in the private plane that Save the Children maintained for getting into difficult places. Someone would meet me, they would know what was safe and what wasn’t. There was no possibility of my saying, ‘I’m not sure I’m up for doing this’ – I had taken on the job, and this was where they needed me to go. But I realised even before I left that I did not have what it takes to do this kind of work.

In Nairobi I was greeted with the news that the Save the Children plane was out of action. I felt a huge, guilty relief – short-lived, for a big guy who was there on short term contract said, ‘I’m going into Mogadishu tomorrow on a Red Cross plane. Come there instead.’ I was too inexperienced, and too conscious of my own inadequacy, to recognise him for what he was – an adrenalin junky strutting his Emergency Boots, a wild card who liked to act spontaneously – which in that context meant irresponsibly. He had no business taking me in to a high-security area where there was nothing practical for me to do; but of the procedures I at this stage knew nothing. So I tried to behave as if nothing unusual was happening as we climbed into a small plane and perched next to boxes of medical equipment, to fly into what was possibly the world’s most dangerous city. I remember still the sight of the coast below us as the plane circled over Mogadishu – a moment of astonishing beauty before we landed into a nightmare … an airstrip bristling with barbed wire and armoured cars … Sitting in a car with a young Somali lad on each side, pointing guns out of the windows …Manoeuvring through bombed-out streets filled with desperate-looking people, many hobbling on crutches, many more dressed in rags … To arrive at a high-security-fenced compound. The relief as the gates closed behind us – but now anxiety came rushing in. What on earth was I doing here? Save the Children’s Country Director made his displeasure coldly clear to my high-jacker. My presence simply added a burden to their overstretched resources. Even if he invented ways of making me useful – which to his credit he eventually did – I could not move anywhere outside the compound without taking up a vehicle that was critically needed elsewhere, and the time of a driver, security staff, an interpreter.

In the four days I spent there I developed a respect which I have never lost for those who voluntarily work in such situations. I got glimpses also of the cost it exacted from them. For hours each day and night they were imprisoned in the compound, which was no more than two adjoining houses and their yards. They carried a double set of tensions, the life-threatening ones of the world beyond their security fence, and the inner ones that came from being claustrophobically confined inside it. If some of them lost perspective, it was hardly to be wondered at. It is impressive that they achieved anything at all – which they did. Through the worst of that time, they kept a minimal health system functioning; and later, stimulated in part by my unauthorised visit, they found ways to support communities to get schools going again. They knew they couldn’t wait for the war to be over.

Twenty years on, things have moved on in the world of humanitarian aid. Perhaps there are still big-booter adrenalin junkies around, and there will always be stories about things that go wrong in emergency response. But there has been a huge momentum to strengthen how agencies and their workers carry out these difficult roles. One example is the Humanitarian Leadership Programme that is run as a partnership between Save the Children, Deakin University and many other agencies. People who have taken part describe the stresses they work under:

Making a timely decision is crucial in crisis situations. You need to take risky decisions and you often can’t wait until all the information is available. Risks just have to be managed, and as a leader you will be held accountable … It takes managerial courage in a lot of ways – talking to military, asking for help, reaching out to strangers. Simply being out there requires a lot of courage.

It’s significant how many of them reflect on how the training has helped them become more self-aware about their roles as part of a team:

We assume what’s important is getting through tasks, making some brave decisions. Yes it’s all of those things, but they are secondary actually. What’s more important is how you make individuals feel … Remembering to smile. Remembering that how you behave is so important. Your actions matter for sure, but more just your presence in the room and how you relate to people … You need to know people and know how they work, and trust them … Ninety percent of my team had not worked in humanitarian work before so everybody was new to this. It was key to be able to involve them from the beginning as to what we were all trying to achieve … We would sit down every night to have a Where are we at? How are we going? What do you need from me in terms of clearing the road or pushing through things or supporting you by bringing you resources? … You have to be a voice for the field staff – What are our issues that I need to bring up? And then bringing that up with the head office, really fighting the field office’s corner … If you set that tone in the right way, being positive, being enthusiastic, people will want to work for that … People really appreciate calmness. That voices are not raised. That we have quite heated discussions but nobody storms out of the room. And no matter how tired we are, let’s always have a laugh …

I hope that before that unknown group of armed men broke into the house of People in Need, those nine men who died had had time sometimes for a laugh. No matter how tired they were.

3 thoughts on “A special kind of courage”