Beautifully written, entertaining and moving, the story of a young woman’s life on the run across frontiers, cultures and life-styles – and an exploration of the power of music.

As a politically naïve student, Jennie suddenly has to flee her native South Africa with a boyfriend she had almost decided to leave – to be stranded as an exile in neighbouring Swaziland. Fending for herself in a new culture, she discovers ways of living and a kind of music that she connects with unexpectedly strongly.

As the story moves between Africa and 1970s London, it weaves the music of different cultures through the patterns of work and love and politics in which she tries to find a meaning in her everyday life.

‘Suffused with the colours of Africa and the sounds of song, this is an exhilarating book that celebrates the 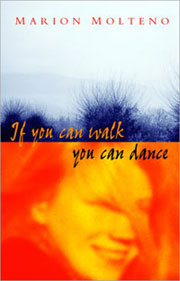 Reviews of If you can walk, you can dance

The Independent
An ambitious and gripping story. Her eloquent exploration of what music can mean in life is handled with a zest that outshines most of this year’s cacophony of musically-themed fiction.

New Indian Express
Molteno spins an exquisite love story against a backdrop of political unrest, following with great flair and sensitivity the trail of Jennie as she traipses across geographies in search of her inner music.

Africa Book Journal
A novel of the human condition, tragically yet beautifully recognizable.

Judith Weir, composer
There is a new musical philosophy around today which comes from worldwide sources and is to do with participation. It’s so new nobody has put it on paper yet – until Marion Molteno expressed it perfectly in this novel. Anyone interested in a new way of thinking about music should read this novel.

Corrine Woods
She can take an essentially simple story and constantly surprise you with the freshness of her perception. Arresting, refreshing, honest, and a wonderful read.

What readers say about If you can walk, you can dance

David Birmingham, Canterbury
So full and rich that it knocks most Booker Prize winners into a cocked hat. The treatment of music is profoundly satisfying. And as for the portrayal of human love that informs the whole, it simply could not be bettered.

Sheila Crawford, Northumbria
A brilliant novel, totally inspirational. Even at my end of a teaching career it made me want to do things differently. I’ve never felt so clearly before the music/language link.

Sonja Egeland, Santa Barbara, California
Your words opened up my heart and my life in a way that nothing else could have done. My copy is well-worn by now as I have read it in every major transition in my life. I wanted to thank you and describe to you how deeply the words that you had the courage to place on a page have touched me.

Janet Price, Shropshire
The book just jumped out at me when I was browsing in a book shop. I started reading it when I was recently laid low physically and emotionally and became totally absorbed and tuned in to Jennie’s journey. It was a profound experience.

Tina Hyder, London
A great read and a brilliant story. Very refreshing to read a story that is optimistic, romantic and serious (in the best sense!)

Premila Lewis, New Delhi
What a beautiful, moving story. If you don’t win prizes it will be strange indeed. Your delineation of the core relationships is amazingly rich and profound. Your life experiences must have taught you the remarkable strength, sensitivity and understanding of complexity that your writing expresses. I shall buy as many copies as I can afford, for the people I love most.

Peter Luff, Oxfordshire
Immensely powerful on a number of different levels. It illuminated so vividly both the politics of the era and the personal and social politics of the central characters. A deeply moving human story.

Ben Kwakye, Ghana
A powerful work, whose beautiful prose and accessibility belies its power – and in fact reinforces its total effect on the reader. Through Jennie we come to learn that if we confront and negotiate life, we can manage its sadness.

Jeanne Vickers, Geneva
I found it an extraordinary book – so poetic and profound. It is beautifully written. I loved it and wished it had not stopped where it did.

If you’d like to send your comments, email marionmolteno@longstonebooks.co.uk

One thought on “If you can walk, you can dance”